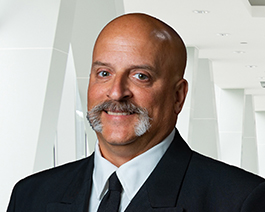 Kenneth Werstak is the CBRNE Program Manager for NSRI Field Operations and Training.

Werstak served a 24-year U.S. Government career as Special Agent and Supervisory Special Agent (SSA) with the Federal Bureau of Investigation (FBI). For 28 years, Werstak also served as a firefighter and Nationally Registered Paramedic in the volunteer service, as well as the professional career field, where he continues to hold various certifications.

As a former FBI Hazardous Materials Technician and Operator, Werstak has led and participated in multiple high-profile FBI investigations, including the FBI Amerithrax investigation from 2002 to 2008. Additionally, Werstak led a successful multi-agency response, recovery and successful prosecution of a lone offender that desired to utilize homemade ricin to injure and potentially kill first responders in Coventry, Ohio. From 2017 to 2019, Werstak further led the U.S. Government’s National Technical Nuclear Forensics, Ground Collection Task Force where multi-agency U.S. Government partners  exercised SOPs/SOGs in the response to intentional acts of terrorism involving nuclear material within the U.S. and Allied countries.