NSRI Fellows are encouraged to attend the virtual introductory kick-off meeting on Thursday, April 29, 2021, from 1:00 - 3:30 p.m. CST. You will hear directly from a Department of Defense expert, receive more details about the objectives of the fellows program and gain deeper insights into NSRI's research programs. All details will be added here, so please bookmark this page and watch your email. 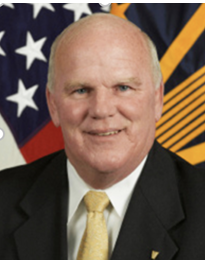 Mr. Bryce started his Consulting Company in December 2020.  His services include: Acquisition, Acquisition Leadership; Leadership, CBRN Defense to include Medical.

Mr. Bryce retired from federal service on 31 December 2020 with over 48 years of service to our Nation. He served with the U.S. Marine Corps in uniform and as a civilian for (38 years) and the U. S. Army Senior Executive Service for (10 years). He retired from the position of Joint Program Executive Officer, Chemical Biological, Radiological, and Nuclear Defense

Mr. Bryce was appointed as the Joint Program Executive Officer, Chemical, Biological, Radiological and Nuclear Defense (JPEO-CBRND) on 22 October 2015. As the JPEO-CBRND, he had materiel acquisition decision authority for the services on chemical, biological, radiological and nuclear defense equipment. He provided acquisition management and professional leadership on complex issues related to joint service CBRN defense acquisition programs. He planned, directed, managed, and coordinated the JPEO-CBRND’s mission including the development, acquisition, distribution, and deployment of highly specialized and dynamic joint CBRN defense devices, as well as medical diagnostic systems, drugs, and vaccines.  Responsibility also included interagency coordination for a whole-of-government approach.