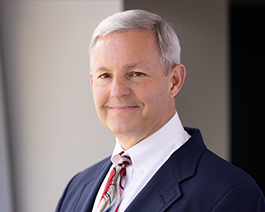 Patrick Rhoads serves as the associate director of the nuclear enterprise support program for the National Research Institute (NSRI) at the University of Nebraska.

After graduating, Rhoads was commissioned in the U.S. Navy.  He served six years at the headquarters of the prestigious Naval Reactors Program. He excelled there as a systems engineer for nuclear submarines and prototypes.

In his civilian career, Rhoads held many managerial and technical positions in what would become NNSA, which stood up in 2000. Some of his accomplishments include:

In his 38-year federal career, Rhoads rose to the executive level in 2004 and retired at this level 16 years later.

Rhoads met his bride, Stasia, while serving as naval officer in the Washington, DC area.  They have made their home there since they married in 1987.  They have three grown children and, as of February 2021, three grandchildren.

Beyond work life, Rhoads has been a community leader in youth basketball programs and youth ministry. He published a book entitled, The Gospel Truth: You Can’t Make This Up, which assesses the historicity of the gospels by employing the systems engineering process, which he has used for nearly forty years.