This article was originally published by University of Nebraska–Lincoln Communications. 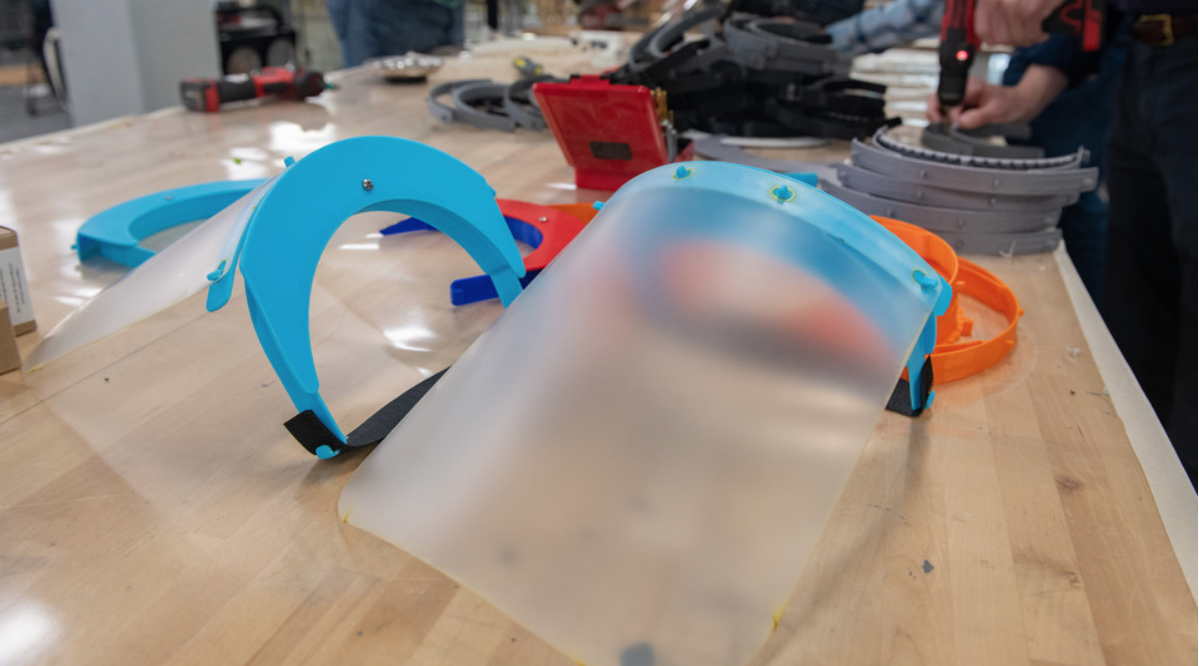 Greg Nathan | University Communication | Face shields have been assembled from 3-D printed and laser-cut parts, and now, injection molding will be used to mass-produce parts for face shields.

Nebraska Innovation Studio is closed to the public, but its leaders and members are working around the clock to produce face shields for hospitals across the state.

Personal protective equipment shortages have been well documented throughout the United States as COVID-19 has spread rapidly. That trend is also hitting Nebraska, where hospitals are starting to run short.

“We’ve had a volunteer army step up to help out with this,” David Martin, director of Innovation Studio, said. “Either NIS members or people connected to NIS have been delivering 3-D printed parts for the last week, and we’ve been putting them together.”

Now, through additional partnerships with the University of Nebraska-based National Strategic Research Institute and private companies including Firespring, Midlands Packaging, Lincoln Tool and Design and Virtual Incision, a small team at Innovation Studio is beginning assembly of around 1,000 shields a day, which will benefit more hospitals.

The effort started when a representative of Bryan Health reached out to Nebraska Innovation Campus, inquiring if the makerspace had the capability to produce personal protective equipment on 3-D printers. A team of on campus and community innovators — including Shane Farritor, Ben Terry, Max Wheeler, David Martin, Jerry Reif and others — formed to take on a monumental task of fulfilling a need of more than 13,000 face shields.

“As soon as we started talking numbers, we realized that 3-D printing didn’t make sense, and we started exploring other paths,” said Farritor, Lederer Professor of Engineering and founder of Virtual Incision.

It took only 10 days to go from the initial idea to mass production of parts, thanks to efforts from the campus and business community, Farritor said.

“That's pretty special,” Farritor said. “This may be the reason Innovation Studio exists — where people come together to make stuff happen that helps others.”

The Terry Research Lab was able to do injection molding on campus, which allowed for making a face shield part every 30 seconds — much faster than 3-D printing, which takes two to four hours per part.

Terry credited both the College of Engineering and the National Strategic Research Institute with quickly approving and funding his lab’s contributions to the project.

“My lab is funded by NSRI, and I called our project sponsor and within five minutes we had funding and permission to do this,” Terry said. “Our College of Engineering administration has been phenomenal as well.”

Matt Newman, of the Terry Research lab, worked over 100 hours in six day to design and build the mold, a process which typically takes four weeks. The compressed timeline was made possible due to help from Tony Wilson in his lab, as well as Robert Rhynalds, shop manager for the instruments shop in the Department of Physics and Astronomy; Jim McManis and Matthew Bartels, of the engineering machine shop; Mark Stroup of the AM/Neat Lab; and Lincoln Tool and Design, who provided plastic for the injection molding and consultation for the mold.

“It was a large group effort and many, many hours to get the machine up and running producing parts, but we’re now able to do a part every 30 seconds,” Terry, associate professor of mechanical and materials engineering, said.

Additionally, companies have been coordinating with Innovation Studio to continue 3-D printing parts as well.

“A couple of librarians from Nelson just dropped off the frames for 13 face shields, which they made using a 3-D printer there,” Martin said. “Kawasaki, Li-Cor and individuals dropped off a total of 75 parts just yesterday.”

The small team at Innovation Studio will be assembling face shields as long as they can continue to get raw materials. In the near future, the clear plastic will run out and they have ordered more, but Martin and Farritor said they have immediate need and are reaching out to see if any companies have it in stock. Companies and individuals who can spare the clear plastic sheets are asked to send email to innovationstudio@unl.edu.