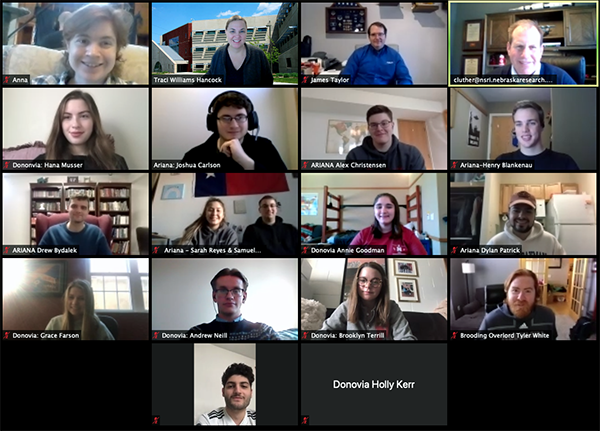 In the remotely-hosted venue, two teams — Team Ariana and Team Donovia — represent hypothetical great power countries on a collision course over competing objectives regarding a third country caught in the middle. With the starting scenario already at a boiling point, the game then forced the teams to employ either cyber weapons, conventional military forces or nuclear weapons to achieve their interests.

"We had to take into account the various strategic, logistical, political and cultural consequences that each of our actions would have on the broader conflict, including how they could possibly affect our civilian populations,” said Alex Christensen, senior in the College of Arts & Sciences. “Being able to engage with students with similar backgrounds proved to be a very helpful mental exercise of employing several of the important concepts we have learned at UNL, especially those related to deterrence.

“The wargame was undoubtedly a thought-provoking simulation that supplemented my academic background of national security studies and international affairs.”

The unique aspect of the Rothgar Rebellion is that it incorporates the attributes of modern cyber weapons — the ability for them to go undetected or unattributed, the potential for unintended spillover effects, and then how these weapons can directly disrupt a country's non-combatant population and critical infrastructure.

Ultimately, on this day, Team Ariana was victorious.

Through this experience, the students were exposed to a military wargaming technique that placed them in an immersive environment where they were required to make decisions and then deal with the consequences of those decisions in a dynamically evolving situation.

They gained a deeper understanding of the strategic deterrent capabilities that underpin the United States’ national security strategies. They also saw the incredibly difficult and unique problem set that cyber weapons introduce to deterrence.

“Every student I spoke to in the subsequent days absolutely raved about the experience."
— Dr. Tyler White, UNL professor of practice, political science

“These exercises have introduced students to work in national security in a way that has changed the career ambitions of a significant number of my students — inspiring the future DOD workforce is something I’m particularly passionate about," said Dr. Tyler White, professor of practice in the UNL political science department. “I also find these experiential exercises to be more valuable than just reading and writing assignments. Overall, a tremendous benefit to students’ overall university experiences no matter their field of study.”

If you are a faculty member, student or external entity to the university interested in a wargame, please contact Chris Luther, NSRI senior operations analyst.