After 3,200 hours of intense research, writing, coding and collaborating, seven undergraduate students recently briefed their internship experience and the resulting online wargame to none other than Lt. Gen. Thomas Bussiere, deputy commander of U.S. Strategic Command.

“To have the opportunity to brief a senior leader of a combatant command was a tremendous experience for me going forward in my career,” said Cadet Frank Miele, a senior in Reserve Officer Training Core (ROTC) at Pennsylvania State University. “I’m proud of what our entire team produced and for how we performed under that type of pressure."

Miele and his peers served as strategic deterrence interns for the National Strategic Research Institute (NSRI) at the University of Nebraska this summer, updating NSRI’s limited nuclear conflict tabletop exercise and transforming it into a virtual format. The online platform will allow university students and researchers as well as military and civilian leaders to play the game from anywhere.

An interdisciplinary, joint civilian-ROTC team, the interns hailed from the University of Nebraska, Pennsylvania State University, Eastern Illinois University and the University of Vermont with majors ranging from political science to computer science, mathematics to national security.

In their 30-minute briefing the interns summarized weeks of immersive study under the guidance of Dr. Christopher Yeaw, NSRI research director for nuclear programs, and Chris Luther, NSRI senior operations analyst. They explained in-depth the wargame’s challenging premise of a limited nuclear conflict between Russia and the U.S. in Ukraine, describing the compelling escalation control difficulties they studied and the scenario and remote-play adaptations they engineered.

“I appreciate our NSRI teammates for developing pathways to seek, educate and acquire young talent interested in very tough topics such as those in areas of national defense,” General Bussiere said. “I am very impressed with the level of quality I was presented and look forward to seeing where these amazingly talented young adults end up in their careers. Hopefully, it’s with the department and USSTRATCOM leading the future of strategic deterrence." 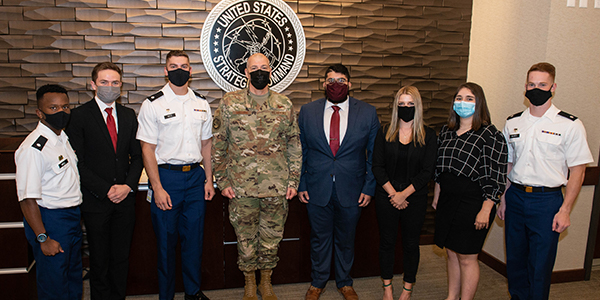 The experience was transformational, said Annie Goodman, a political science major at the University of Nebraska–Lincoln. Goodman started the internship of the opinion that the USSTRATCOM’s mission space was dated. Four hundred hours later, she has a matured perspective.

“This internship has completely opened my eyes to the threats we are facing in the changing nuclear landscape as smaller nuclear weapons are created that change the idea of proportional response and the ethical use of weapons of mass destruction in international conflict,” she said. “If I could impart one piece of wisdom on my friends and family it would be that strategic deterrence and the upgrading of our nuclear forces are critical to the continued safety of the United States, our allies and the world as a whole."

With the research they conducted, the interns produced an interactive online experience that will help NSRI foster new generations of experts in limited nuclear warfare.

Neil Koul, a cybersecurity major at the University of Nebraska at Omaha, worked as one of two technical interns tasked with transitioning the updated road to war and supplemental materials created by their research-oriented peers into a virtual experience. The process included learning an entirely new programming language and three new frameworks.

“We had to learn everything in two weeks and then jump right into programming everything in order to finish in time,” he said. “It was very challenging — definitely worth it. I’ve heard stories from other interns who work at fortune 500 companies who work on some search function that never sees the light of day. Here, I know the things that I am building aren’t going to go to waste — they matter."

In total, the interns produced:

“I’m immensely proud of how these students — truly high-capacity young professionals – entered this extremely challenging space of deterrence, applied and expanded their research and technical skills and walked away with a tangible product that NSRI will be using for years to come,” said Yeaw. “There are not many experiences like this for undergraduate or even graduate students. There also aren’t many students who could be so incredibly successful.”

General Bussiere was not the only senior leader to encourage each of the interns to consider careers in national security. A network of former military officers from NSRI engaged with the students regularly, and each student gained tremendous experience briefing high-level leaders. They also grew their collaboration skills and expanded their contextual national security knowledge.

“This experience has influenced my future education and career path greatly,” said Grace Farson, mathematics major at the University of Nebraska–Lincoln. “I plan on working for the federal government on weapons analysis or targeting foreign assets. NSRI has helped not only educate me on various national security topics but provided me with connections and experiences that have enhanced my knowledge base and led me to finding my future career path."