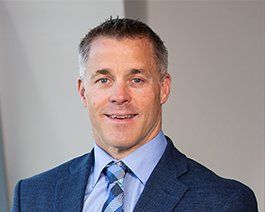 Adam Carlstrom serves as the Director of Strategic Mission Systems for the Nebraska Strategic Research Institute (NSRI) at the University of Nebraska.

In his role, Carlstrom represents NSRI and NU with U.S. Strategic Command, the sponsor of NSRI’s University Affiliated Research Center status. This status is designated by the Department of Defense to only 14 total institutions of higher education in the country.

Immediately prior to his role at NSRI, Carlstrom served as Battle Watch Commander at USSTRATCOM. His previous duty station was in Whidbey as the Commander, Electronic Attack Wing, U.S. Pacific Fleet, leading the finest sailors in Navy. He successfully directed the man/train/equip responsibilities for all 15 Electronic Attack Squadron (VAQ) squadrons in addition to commanding the operational responsibilities for five expeditionary VAQ squadrons.

His shore assignments included duty at the EA-6B Fleet Replacement Squadron and US Strategic Command serving as a Battle Watch Commander, Division Chief and the Executive Officer to the Deputy Commander.

His fleet assignments include the “Yellowjackets” of VAQ-138, the “Scorpions” of VAQ-132, the “Patriots” of VAQ-140 and the “Black Ravens” of VAQ-135, making carrier and expeditionary deployments in support of Operations SOUTHERN WATCH, ALLIED FORCE, IRAQI FREEDOM, ENDURING FREEDOM and ODYSSEY DAWN. Additionally, Carlstrom deployed with the Army’s 35th Infantry Division in 2009 for Operation IRAQI FREEDOM, executing Electronic Warfare in support of American and Coalition ground forces in counter-Improvised Explosive Device and counter-insurgency operations for multi-national Corps-Iraq.

Carlstrom has accumulated over 3,000 flight hours in the EA-6B and EA-18G and was recognized as the COMVAQWINGPAC Training Officer of the Year in 2006. He holds a master’s degree in business administration from Grantham University and a bachelor’s degree from Miami University of Ohio, where he earned his designation as a Naval Flight Officer.

He and his wife, Deanie, reside in Papillion, Neb., with their two lovely daughters Madelyn and Sophia.