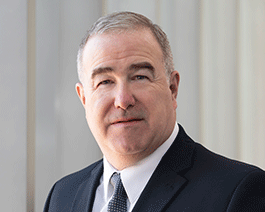 Since taking the leadership reigns of NSRI in January 2021 from Founding Executive Director Lt. Gen., USAF (Ret.) Bob Hinson, Evans has guided the institute’s team of researchers and strategists through the ups and downs of operating during uniquely dynamic times, responding to ongoing COVID-19 mitigation efforts, delivering critical national security research, retooling training, growing expertise and launching new partnerships and programs. Highlights include but are not limited to the launch of:

Learn more about these efforts and the many others via 2022 Biennial Report, mission impact reports, #NSRI10 celebratory campaign and following NSRI mission video.

In these capacities, Evans was a principal advisor to the Commander and staff on all aspects of the command's diverse missions, including:

Evans received his commission in 1984 as a distinguished graduate of the Air National Guard Academy of Military Science. He has commanded at the detachment, squadron, group and wing levels. His operational flying assignments include instructor weapon systems officer in the RF-4 Phantom II; instructor and evaluator navigator in the KC-135 Stratotanker; and evaluator Airborne Emergency Action Officer (AEAO) in the E-6B Airborne Command Post. His staff assignments include:

Evans also chaired two separate Air National Guard Weapon Systems Councils, the KC-135 Council and the Space, Intelligence and Cyber Council. He was a member of the Air Directorate Field Advisory Council from 2004-2012.

Evans is an Omaha native, graduating from Omaha Northwest High School and the University of Nebraska at Omaha.